Anto Says She Was Angry With Big Brother For Telling Her To Follow A Script !! 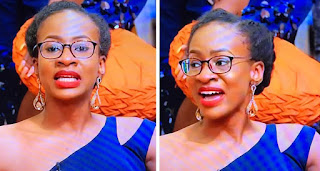 The fearless BBniaja Star Anto has today During the episode said she’s angry at big brother for telling her to follow a script when she entered  the house for the second time after she was evicted the first time.

“Anto says she was upset with Big Brother for telling her to follow a script the second time she went back into the house. She also believes her second eviction wasn’t fair. .
Read Also:#Trending Video: Watch Jazy, Kevin Hart, P Daddy and other Americans Raps dancing  #Shaku Shaku With Tekno Music
According to her , her second eviction wasn’t fair as she believes she wa evicted unfairly.
To her, she had more fan base than some of the House mates who were allowed to stay back as the top 5
However, Ebuka saved the situation on anto outburst as he didn’t want drama or for fans of the show to think the show was scripted!..,
Does that mean the show was scripted because many of them clam to know each other before the show. Thought
Share This Post On social Media
==>>Join Bbnaija 2020 WhatsApp Group

#BBNaija Reunion:BBniaja Kbrule Says His Mum was Battling cancer and that he dropped out of school