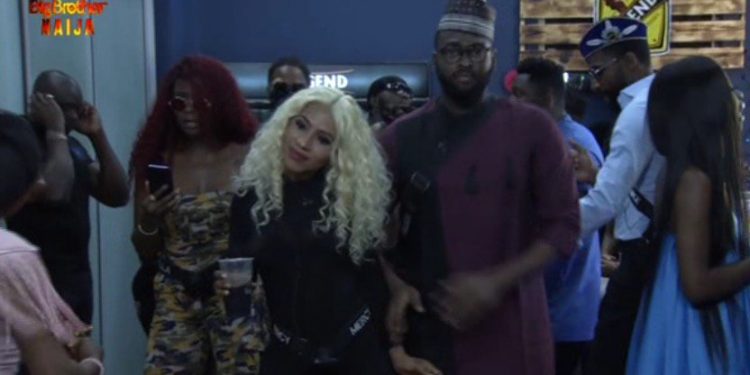 The Big Brother Naija ‘Pepper Dem’ housemates scored heavy points with fans of the show by impersonating popular Nigerian celebrities for the party on Saturday.

News Agency of Nigeria (NAN) reports that the 19 housemates are each required to dress and act like celebrities for the night which drew massive admiration from fans of the show on social media.

The most noteworthy were Omashola as DJ Spinall, Seyi as Kizz Daniel, Thelma as Toke Makinwa, Mercy as Dencia, Mike as Jidenna, Esther as CeeC, Frood as Phyno and Ike as Rema.

Omashola got the most accolades from fans who said he “looked more like DJ Spinall and could pass as his twin”. To complete the look, the Delta-born housemate added the classic, signature cap the DJ is known for.

Meanwhile, Dencia and Jidenna, on Twitter, gave their seals of approval to Mercy and Mike for portraying them on the show.

Reacting to Mike’s costume and portraying of him, superstar singer Jidenna commented @Jidenna, “So…I hear Mike is impersonating me on #BBNaijia.

On her part, Dencia felt honoured to be chosen by Mercy. She said, “Awww. I am so humbled. Her pull up game too strong. I don’t have access to watch but we Stan.”

NAN reports that despite the accolades gotten for impersonating celebrities, fans were disappointed by the behavior of housemates on the dance floor.

They argued that they spent more time dancing to the mirror than actually dancing with each other to the song. Some fans suggested that ‘Biggie ‘ brought Alex Unusual back for just one party, at least.

@Donjazzy said, “Just imagine Alex was in this party with DjBigN on the Desk.”

@_casey tweeted, “Swears……Alex life of the party, all this people I don’t understand #Bbnaija.”

However, DJ BigN who led the turntable received praise for his song choices and setting the right vibes in the house for the housemate.

@DonJazzy tweeted, “Ladies and Gentlemen That was The magnificent DJ BIG N. My DJ. when you are big you are big abeg.”

@IdrisAishat2 said, “He nailed it. Have been dancing away my sorrow. Thanks to him.”

NAN reports that with the second party of the season done, 19 housemates look forward to eviction night on Sunday.