Recall that Biggie issued fake eviction to Seyi and Tacha on Sunday during the live eviction show hosted by Ebuka Obi-Uchendu.

They were later taken to a secret room were they spent three days together.

In the secret room, they played by Big Brother’s rules clearly spelt out on a piece of paper and handed to them by Big Brother Ninja. 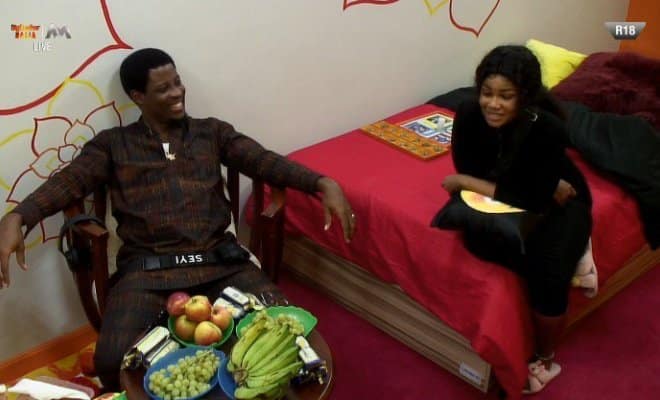 Tacha read out the rules to the public, one of which was to talk quietly, apparently to avoid letting the other housemates know that they are still within the Big Brother house.

However, Biggie on Wednesday asked the housemates to prepare a meal and get ready to welcome two guests.

After much suspense all though the day the special guests promised by Biggie has finally arrived. Housemates were surprised and at the same time excited to see Tacha and Seyi back in the house.

Esther, reacting said she was not surprised to see Tacha and Seyi as she knew biggie was up to something.

Other housemates; Mercy, Khafi, Ike, Mike and others rushed to hug both housemates as they took them on a tour round the house.

Watch the video below;

Do you think the housemates were really happy about Seyi and Tacha’s return or was it all an act?

Related Topics:Download:Seyi & Tacha Returns To The House (Photos & Video)
Up Next

BBNaija 2019: Mercy And Ike Gossiping In The House, See What They Were Gossiping Here