What’s the Pepper Dem gang without serving us some heat in different shades?

Ella went Nigerian on the Housemates last night as she cooked the native “white soup” for all of them. Khafi who was probably eating the soup for the first time ate to her fill.

Our London “cop,” told Ella that she enjoyed the food so much – to which Ella responded that cooking gave her joy. Do you know what they say about the way to a (wo)man’s heart?  Ella darling, tell us, are you trying to cook your way into the stomach of the Housemates? 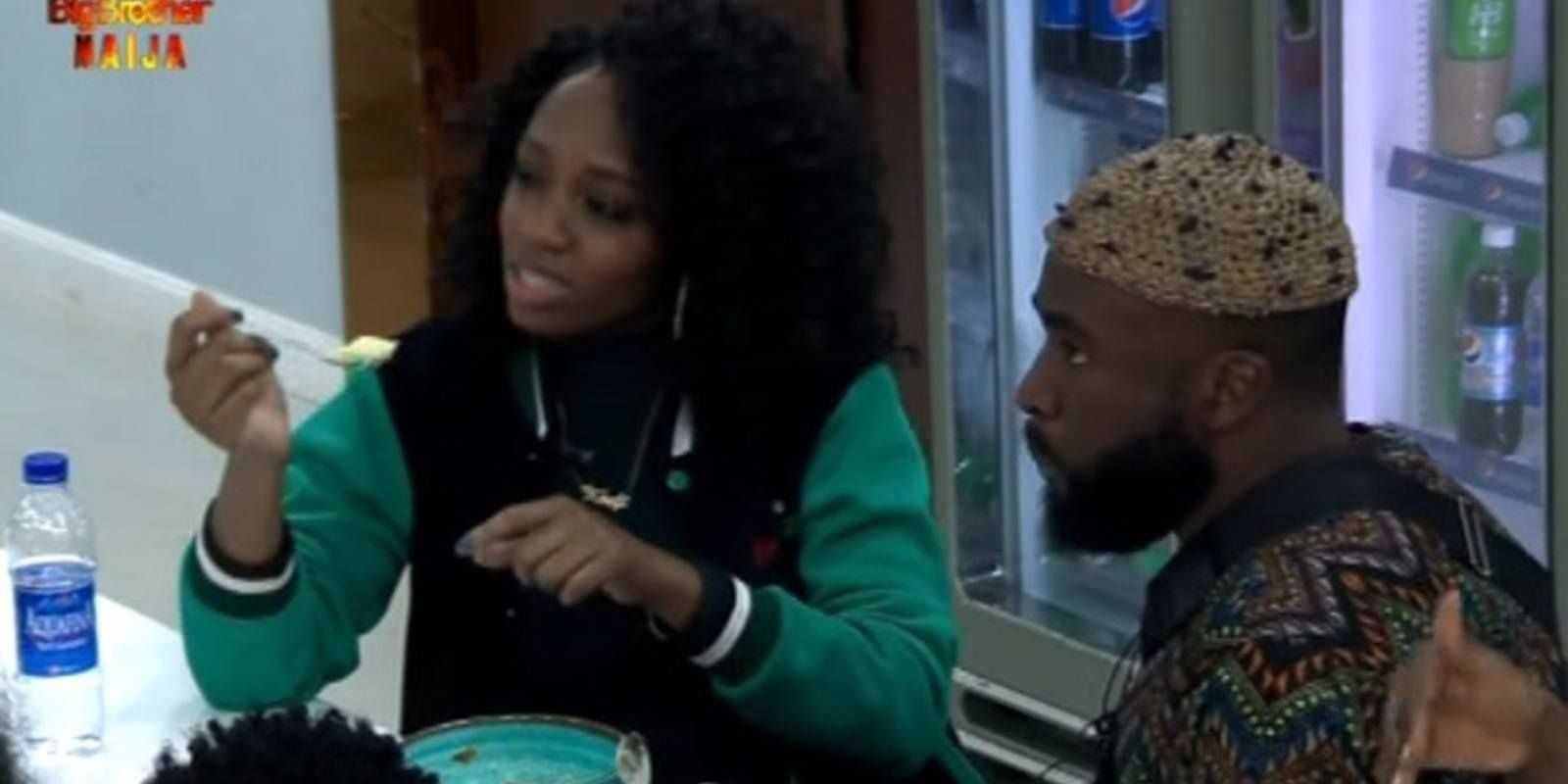 Since Big Brother gave them the silence task, the housemates have refused to forget the childhood games they played during the day. Both the ladies and gentlemen in the House were involved in playing the rubber band games and if any Housemate was lost on the dynamics of any game, that Housemate was taught.

An example was Mike who didn’t know how the rubber game worked but was promptly taught by Sir Dee. They enjoyed the game so much that Sir Dee, Thelma, Tacha and Avalaconsidered using their Bet9ja Coins to buy a pack of rubber bands. Smart?

Another game the Housemates played to keep sleep far away from them was table tennis. Jeff, Frodd, Ike, Gedoni and Tacha improvised by turning the table inside the closet to a tennis table. They took turns to play the game in sets.

Did you feel nostalgic seeing the Housemates play these games? Do you remember any of your childhood favourites?

Tacha, Seyi and Ike took a trip to Big Brother Naija Double WahalaSeason, as they talked about the Housemates who were real and those who weren’t. What could be their intention? Trying to serve us more than wahala, maybe?

The Masseuse Is Here!

Nelson worked his magic fingers again tonight on Isilomo and Ella. From the look of things, his massage business is really booming as his services are in great demand among the Housemates (of course, with the ladies making up a large part of his clientele). During his session with Biggie, Nelson revealed that he got one Bet9ja coin for the favours he rendered to Omashola in terms of massage. How about doing this for a living, Nelson? 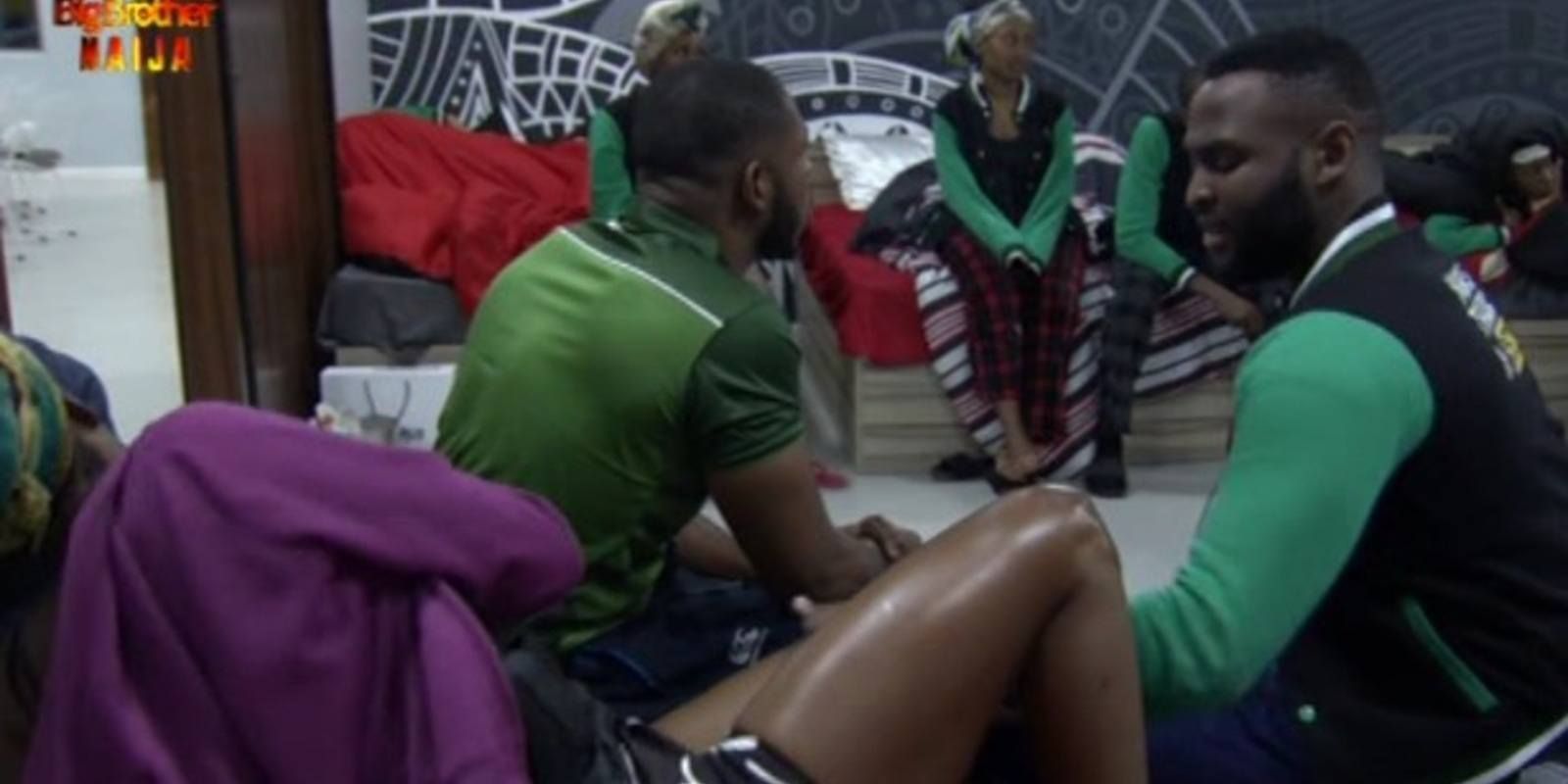 As the day unwraps, we can’t wait to see what the Housemates will bring to our screens. Ready?

An Exclusive Night with DJ Xclusive

What better way to ease the tension of Eviction than having a lit night with DJ Xclusive?

To lighten up the Eviction tension in the House, Big Brother is bringing one of Nigeria’s finest DJs, DJ Xclusive – to set the mood during the first Saturday Night Party – and we can’t wait to see Ella give us some moves on the dance floor. Or would it be Tacha? We’ll find out.

Being the first Saturday Night Party in the Pepper Dem House, the Housemates are looking forward to having a blast – even though it might be the first and last one for one or more of them.

The British born DJ who started the career in the year 2003, is widely recognized for his ability to deliver great music to any type of crowd – both in UK and here in Naija. See why we’re excited to have him party with us?

The ‘Zanku Riddim’ and ‘Gbomo Gbomo’ crooner, will be live in the House this Saturday to inject some partying mood into the Housemates and light up their spirits, as they prepare for their first live Eviction on Sunday.

The party room doors will be open for the first time in the Pepper Dem House and the Housemates will be partying with the Celebrity DJ. Are you ready to party with them?

Big Brother delivered a handful of surprises to the Housemates today. Will they be able to handle the heat?

Biggie had a major announcement sent to the Pepper Dem Housemates – which was read by HoH in the lounge. Here’s how it all went down:

Get Set to Groove

The Pepper Dem gang will be having their first Saturday Night Party in the House this Saturday. (Do we hear cheering sounds?) Trust Biggie to only give the best – which is why he is bringing Superstar DJ to light up the House. Yes, you heard right! DJ Xclusive will be coming to party with the Housemates and you’re invited to party with them. Get your dancing shoes ready.

Following the Eviction announcement, it is only right to ease the tension in the House and we’re looking forward to grooving hard on Saturday.

In preparation for their first Bet9ja Arena Games, the Housemates had to divide themselves into three teams; each team comprising 7 Housemates with a blend of both genders. Of course, the winning team will be rewarded with Bet9ja coins. Good luck guys, you’ll need all the luck.

The Housemates received what may seem as the shocker of their lives today. This Sunday, the Housemates will experience their first live Eviction show.

This surprise birthed an emotional moment as fear and anxiety crept on their faces. Who’ll go home? How will they handle this heat?

Which of their first moments are you anticipating the most? Their first live Eviction, Saturday Night Party or Arena Games?

Who Turned Up The Heat?

Things are heating up in the House.

The Housemates are at it again. Hardly does a day go by without some form of an altercation. The situation in the House is getting extra spicy and the announcement of Eviction this weekend didn’t help matters. The heat has been turned up and these are the outcomes.

What started off with Jeff reading out the Day’s Task and selecting Team Captains for the first Bet9ja Arena Games fast turned into a heated session. Jeff selected an all-male Captain for each of the three Teams and Tacha who clearly wasn’t having it made her displeasure known to Jeff.

Today’s Task was to divide the House into three Teams. Each team comprising of seven Housemates with a blend of both genders for the Bet9ja Games. Sounds Simple right? Well, Tacha thought Jeff got it all wrong with his Team Captains selection and accused him of not being gender balanced. “Seriously, I am not happy… that is very very wrong,” she said. “It’s either we have two girls and a guy or two guys and a girl,” she insisted. Backed by Khafi, who also questioned why only guys were selected, the two insisted Jeff make amends by ensuring fairness in his selection. In his defence, Jeff said he made the selection to ensure all the Teams had equal strength.

A shouting match took place between Diane and Ella on the state of the Kitchen. Ella who went into a fit of rage when she met the kitchen in disarray and littered with unwashed plates took it upon herself to call erring Housemates to order with Diane and Thelma being her primary focus. Ella who stormed the room with a broom accused Diane of not taking the duty of keeping the Kitchen clean seriously. “I can’t keep cleaning up peoples’ mess,” Ella blurted out. Thelma came up with a solution that Housemates should wash their plates as soon as they use it.

It’s just Day 5 and tension is already high as tempers flare. Could this be because Eviction is lurking and the reality of the Game they are in is beginning to set in? Do they now realise every other Housemate is a possible threat? Whichever the case, we are here to see it all go down.

HOW TO VOTE FOR 2019 BBNAIJA HOUSEMATES | BBNAIJA 2019 VOTING POLLS