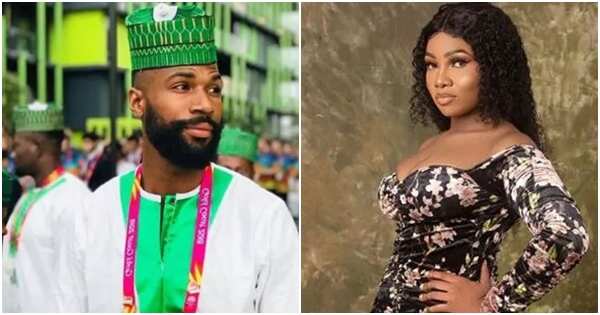 The controversial BBNaija 2019 housemate, Tacha, has spoken up about her beef with Mike. Tacha, while speaking to Seyi in the secret room, explained that Mike is only looking to thrive in the Nigerian market, but she is already in the market.

The lady continued that she knows she will be bigger than the eventual winner of the show BBNaija housemate, Tacha, is no stranger to controversy as she has always been a topic of discourse on social media. This is perhaps due to her antics on the show.

Tacha is undoubtedly not the favourite of other housemates, and she does not seem to care as she continues to emphasise how she will remain until the last day. The self-acclaimed Port-Harcourt first daughter recently spoke on her disagreement with Mike while in the secret room with Seyi.

According to her, Mike, a stranger to the Nigerian market and is only hoping to thrive while she, on the other hand, is already in the market.

She added that he needs it more than she does, and Mike should better correct his head.

Speaking to Seyi about Mike, Tacha said: “You came here, you came into the Nigerian market, I’m in the market already guy! You need it more than I do, so try and correct your head.”

She also spoke on how she will be bigger than the winner of the show at the end of the day. According to her, she is not leaving the house soon, and even if she does, it would not be based on the eviction.

Tacha said: “I am not leaving o, but if it comes up, I go big pass the winner. And I know sey the leaving sef no go be based on the eviction.” Nawa o.

Recall that the dark skin throwback photos of BBNaija 2019 housemate, Tacha, have emerged on social media, which has become the topic of discussion on social media.

BBNaija 2019: Nelson set to call out Frodd over love triangle with Esther

Related Topics:
Up Next
Don't Miss