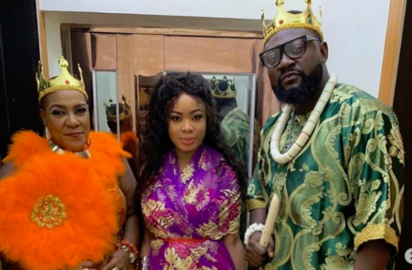 A former BBNaija housemate, Nina Onyenobi started the New Year with the excitement of featuring in a Nollywood Movie, `Olaedo.’ She took to her Instagram handle @nina_ivy to announce this to her fans with pictures from behind the scenes of the soon to be released movie.

“Good morning Fam, I am Currently On The Movie Set of #OLAEDO with Veteran Actors @Yemiblag and @okpokomaureen.’’ Behind the scene picture from the movie `Olaedo   The movie was produced by Ebere Ohakwe and directed by Iyke Odife. Barely two hours after the 2018 BBNaija reality TV show ended, the 23 years old graduate of English and Literary Studies,

Imo State University (IMSU), landed her first endorsement deal with Flawless By Mimi. She contested in the IMSU Most Beautiful Face but narrowly lost the crown to the winner, Sandra Joseph. Her being featured in the movie `Olaedo’ is an open door for the last daughter in the family of five to boost her personality as a designer, model and actress.

Related Topics:BBNaija’s Nina features in Nollywood movie `OLAEDO’
Up Next