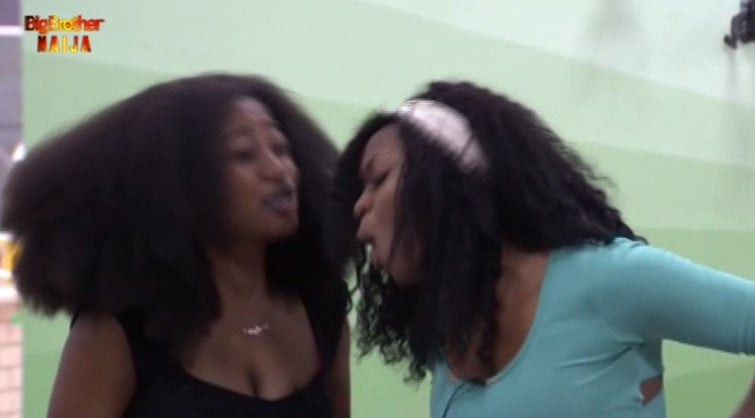 The BBNaija 2019 housemates are finally getting the memo as to why a lot of people are watching the show as Thelma and Esther got into a very heated argument over tasks given to them by Biggie.

So the gist is that the housemates had gathered to come up with ideas for a drama as instructed by Big Brother. Seyi was selected as the director for the drama.

While the housemates were all putting heads together to come up with a perfect plan for the drama, things took a sudden twist as Thelma and Esther got into a very heated argument that almost led to a fight.

The argument rose after Esther had confronted Thelma over the use of the word ‘imbecile’ which according to her is a very sensitive word and topic. Thelma, however, didn’t take Esther’s statement kindly as she challenged her for the correction.

It took the other housemates to calm the tension down as the screaming and shouting match between the two ladies disrupted the drama plans.

All efforts made by Tuoyo to reconcile both housemates proved abortive as they both refused to call a truce…does this mean we have our first Big Brother rivals? Share your thoughts in the comment section below.

Bbnaija 2019: Frodd Used His Veto Power Card  To Saved Himself  From Eviction And Replace Himselfe With Mercy For The Next Week Eviction

BBNaija housemate, Chemeka Okoye aka Frodd has become the second housemate to win the Veto power of the chance badge.

Related Topics:Thelma and Esther Fight Video in BBNaija 2019 House (Watch Video)
Up Next

Bbnaija 2019: Frodd Used His Veto Power Card  To Saved Himself  From Eviction And Replace Himselfe With Mercy For The Next Week Eviction